A discovery: Riesling from Marin County 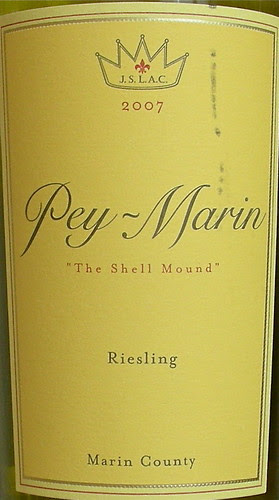 Marin County? A little known wine region for sure. Located north of San Francisco and just a stone's throw from Napa and Sonoma, this county has more suburbs than vineyards, with just approximately 200 acres under vine, planted to Pinot Noir, Riesling, Chardonnay, Gewürztraminer, Merlot & Cabernet Sauvignon.

It's a coastal region, bordered by the Pacific Ocean to the west and the San Francisco Bay to the east, with a climate marked by relatively warm winters and very cool summers. Thanks to a long growing season, the resulting wines are characterized by a high acidity, low alcohol, and bright flavors.

Winegrowers and winemakers Jonathan and Susan Pey of Scenic Root Winegrowers are pioneers in the production of wines grown exclusively in Marin County. Their Shell Mound Riesling was named after the many mounds of oyster shells left by early Americans settlers across western Marin County. The wine is estate grown in an eighteen year-old vineyard located less than eight miles from the cold Pacific Ocean. While the vines require meticulous work, very little is done in the winery. After hand-harvesting and hand-sorting, there is no oak, no blending, and no malolactic.

The 2007 Pey-Marin Vineyards The Shell Mound Riesling Marin County is only 11.8% alcohol. It had a bright color and a mineral nose with notes of citrus. On the palate, it was dry and crisp with a nicely concentrated mouthfeel and aftertaste. Try it with an Alsatian onion tart, it's delicious!

Mike, thanks for your feedback!

Catherine Granger
I don't remember exactly when I really started enjoying wine, maybe during one of my college years that I spent in Bordeaux. I didn't know much about wine at that time and I remember buying wines based on the label design rather than on the name of the château... About me